The first historical records show Dick Ryan owned and operated this prior to 1911. Dick and Mat Ryan were brothers and both owned similar shops in town.

In the coming years the Mills family took over the running of the shop (circa 1936) and created a special area for ice creams, milk shakes and soft drinks.

Behind the shop was a tin shed selling produce. Petrol was sold from the bowser out the front. This shop was run by the Bundesen family from 1970 to 1985.

Henny Power’s shop (on left of photo) was a haberdashery and sweet shop (circa 1912). Henny was well known and very active in the community. She would hire out a swimsuit to those who wanted to swim and didn’t own any swimmers.

The grocery shop in the photograph changed trade several times throughout its history. In the 1940’s a Greek migrant family named Notaras purchased the shop and converted it into the Seagulls Café. The Stouraitis family bought it and converted it into a fish and chip shop. It burnt down in 1961. It was also known at one stage as the Britanic Cafe.
|
The Larges made toffee apples for sale on picnic days. All groceries arrived from Rockhampton by train. The Railway Station was across the road so delivery was made easy

In 1934 Mary & Bob Large leased the Central Café (third shop on the right. Note the baker’s advertisement on the roof). The shop sold groceries and had a dining area that boasted a tasty menu. At the rear of the store a copper with boiling water was available on Sundays for train passengers who just wanted a billy can full for a cuppa.

Ray (their son) and Hilda Large purchased the shop in 1964 and continued the business until 1982. It remained a grocery store until 2012. 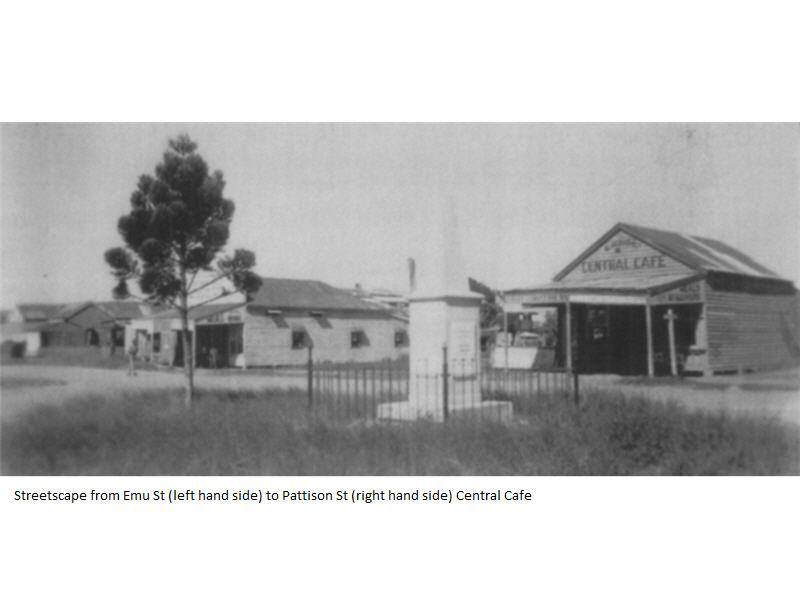