In the early days of coastal settlement, it was customary for men to bathe naked, rushing into the sea after a Iong dusty ride to the beach. Until after the end of the nineteenth century, sea bathing was restricted throughout Australia to the hours of 8pm to 6am.

It was 1909 before daytime bathing was legally permitted on the Capricorn Coast. Costumes were then of the neck to ankle variety.

Segregated bathing was the order of the day and the area where women and children bathed was tucked away so that modesty and privacy were ensured at the expense of safety. Men’s Beach was the main area along the foreshore now commonly known as Main Beach.

A little secluded sandy bay about 220m long under Constitution Hill (where the Singing Ship now stands) formed The Ladies Bathing Place. People changed into swimmers in the open or in the dunes but six bathing sheds were built or the women and children at what has become known as Ladies Beach.

By 1909 some privately owned one room bathing sheds on stilts were starting to appear on some of the beaches. They provided places for people to change in privacy and gave welcome shade underneath to sit and watch passing beach traffic. A cyclone in 1931 saw many of these bathing sheds destroyed but some were still seen on both Fisherman’s Beach and Men’s (Main) Beach until the 1970’s (note boxes in photo). Mixed bathing became accepted on the coast from Yeppoon to Emu Park in the early 1930’s. 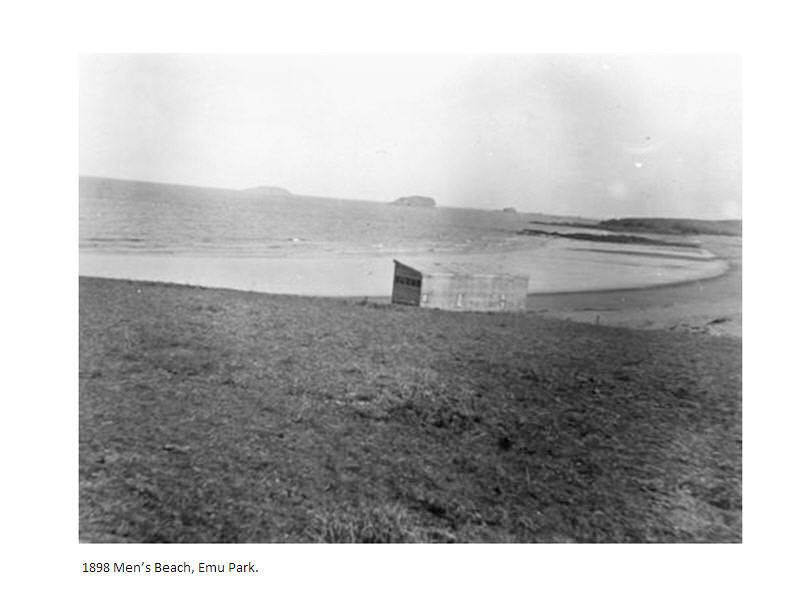