The Emu Park Railway opened in 1888 and closed in 1964. It was stated at the time that the line was an ‘expensive toy’.

This was because Rockhampton business people wanted a rail line to a seaside resort. When the line was opened Emu Park was still called “Hewittville” but the railway used Emu Park as it was the most widely known name. From then on the town became known as Emu Park. Cost of the railway was £149,829 19s 7d.

The distance from Rockhampton to Emu Park was 29 miles or 47 km. The Railway Station and engine sheds received major damage in a cyclone in 1949. The station was repaired but the carriage shed was completely destroyed and the other shed was demolished in 1974.

Every day water was pumped from a pump house in Bell Park to clean and service the trains. The cleaner’s job was to prepare the train for travel. His working hours were from midnight to 8am and jobs included cleaning engines, cleaning the engine shed and the responsibility for having a head of steam ready for departure by 6am daily. The porter cleaned the carriages. It was said to be one of the cleanest trains in Queensland.

A whistle alerted townsfolk of imminent train departure at 6am, the second whistle at 6.40am and a final warning bell on the platform at 6.55am announced its departure for Rockhampton. During the week the train was the main transport for workers and secondary school children who needed to catch the train to Rockhampton until a high school was built in Yeppoon. Aboriginal and Islander people were relegated to a freight carriage and often had to sit on each others laps.

Gates blocked off Pattison Street from Hill Street to Hunter Street from 9pm to 6am daily to exclude stock. These gates were only removed in the late 1930’s.

The railway was built because Emu Park was heralded as a spectacular seaside resort which boasted healing properties and was renowned for fresh air and therapeutic remedies. However, this did not sustain the railway line as within a decade viability was questioned as the line did not pass through farming or mining areas.

This was in spite of the fact that pineapples were loaded at Tanby Station, timber and eucalyptus oil at Coorooman Station, cattle at Tungamull Station and quarry stone at Sleipner Station.

Goods were transported from Rockhampton daily and grocers met the train every afternoon to collect their perishable products, including ice. Trade was not one way though. Oysters, fish and at times shell grit were loaded at Emu Park and transported daily to Rockhampton.

Postal services were also delivered back and forth. There were four stations with station masters at each because goods were loaded from these stations. Thirteen other sidings served to transport workers and school children to Rockhampton from Monday to Saturday.

The railways once ran 7 trains from Rockhampton to Emu Park.

It was such a logistical nightmare they never did it again. From then on they ran up to 5 trains during weekends, holidays and company picnics. For example, CREB (Capricornia Regional Electricity Board), the Lakes Creek Meat Works, Mt Morgan Mines and the Railways all held picnics in Bell Park. At times 4,000 people were known to arrive by train on a weekend. 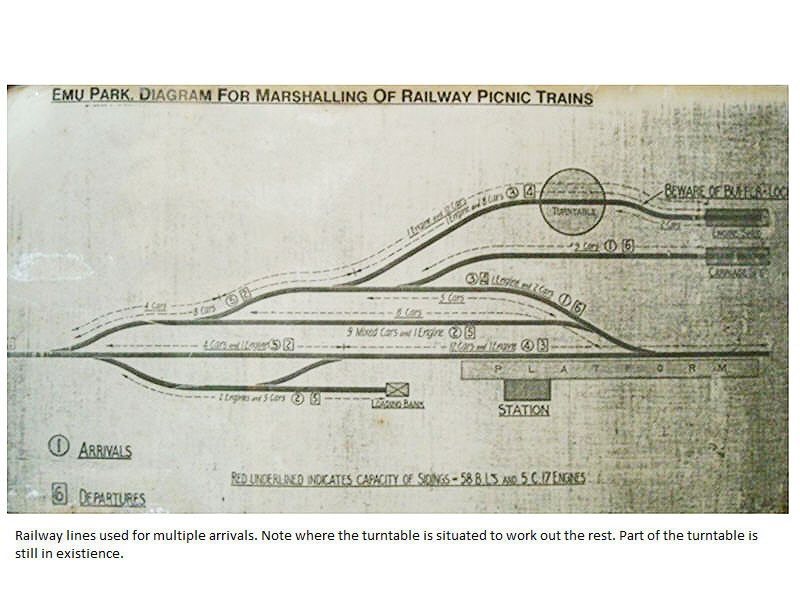